Showing posts from January, 2012
Show all

The perversion of democracy 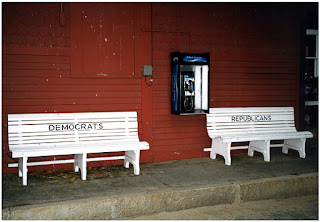 Watching the Republican candidates for the American 2012 presidential elections is not something to boost your mood. I can't say much about mr. Romney, although his 13% tax and Swiss bank account do not do much to give him any credit. But with Santorum, the catholic Taliban, Gingrich with his debatable ethics and gynecologist Paul who thinks you can run the country like you did it in 1900, you might wonder if you are looking at political satire, or a watching political cartoon that came to life.


The people of a small village in Massachusetts could see the humerous sides of
the Democratic vs. Republican debate,as seen on this 1999 photo. I wonder if they still do now?
So, what’s it to you, you might ask. Well, more than you think, I fear. The United States regards itself as the leader of the western world, and indeed it is. Not by ethics or moral, but by sheer power and the size of its economy. So, whoever is a president, his actions affect all of us. Am I exaggerating here? Not rea…
5 comments
Read more
More posts